No other artist deserves the homage of the city of Geraardsbergen (Belgium) more than Jan De Cooman, because no artist has brought more tribute to this city, to the Oudenberg, to its surroundings.

In the first part of his work he praises, pictorially, the “old imperial city” and the scenery on and around the Oudenberg (the Old Mountain).

The fact that he was not held fully in admiration during his life is due to himself and the spirit of the times. The period between the two world wars was indeed marked by a materialistic bourgeois-mind.

The middle class, the class that could financially permit itself to buy art, had only eye for business, making money and investing with as few risks as possible. The attained moneyed-status was to be shown by moving into a large manor house, luxuriously furnished, living a comfortable life, enjoying food and drink and on top of that, as a devirsion, cafe- and theater visits.

Cultural wise their horizon was much too limited to spend money on the work of an, in their view, pretty extravagantly dressed artist. 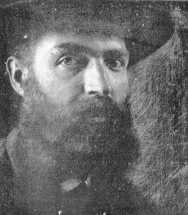 De Cooman, with his pale face, his deep-set sparkling eyes, his wire-haired apostle-like beard, his sweet voice, was a personification of simplicity and humility. Dressed in a velvet suit, of undefined cut, always with a black velvet hat, in wintertime with a black cape, he was a striking figure, known by young and old.

The work was like the man: quiet, soft, introvert, poetic, serene. He was a charming, simple and good-hearted man. A hard worker who, especially concerning his etchings, experimented a lot and looked for perfection. This sympathetic man has always remained himself and never let himself lead into the temptation of mindless, common and inferior work that was not his nature. Rather than being a follower – an epigone in one or another artistic trend – he remained himself, someone who looks for peace, tranquility, poetry, mood and relief, a praised realist or a late Romanticist.

De Cooman was an artist, blessed in the strict sense of the word: his subject inspired him and he put inspiration into it; he literally re-created his subject that always remained just as realistic and resembling but so much more poetic, assisted by his extraordinarily appealing drawing talent.

He never improvised and never adorned himself with the feathers of someone else, by making easier and inferior copywork, as was in fashion at that time.

If one can detect an evolution is his work, it is the evolution of every serious artist, who reached mastery by searching and hard working.

He painted and etched mainly landscapes, but he also painted still lifes, portraits and interiors. If I wanted to indicate a general trend in his oeuvre, it would be the following: quiet poetry, gentle happiness, calm atmosphere, closeness, joy of life.

In all of his paintings De Cooman showed himself as the competent expert, who minutely chose the right colors, considered the composition and painted strikingly. His still lifes are more than meritorious.

But personally, I value his “farm interiors” much higher, with the soft play of light and shadow on the tiled floor and the beams on the ceiling, the stove, the brick fireplace and bulrush chairs. The well considered tints bring an atmosphere of calmness, a tender poetry and a modest enjoyment of life.

De Cooman regularly painted portraits: the picture of characters selected by himself (the gardner, his spouse, a pipe smoker or a seamstress) or, by assignment, the artistic product of a notable, a family member, a friend.

Although the human being only rarely appears in his landscapes and interiors, De Cooman proved, by his portraits, that the human pose and anatomy, the gesture, the look, was no mystery to him.

The portrait is not a like a photograph. It uncovers part of the soul, the character and the state of mind of the portrayed. Most of these portraits are of course in private property, so one has to limit oneself to a few works.

At a much lower level are the four Stations of the Cross, painted between 1927 and 1939. One should not forget that the artist was limited in his freedom: an assigned job, an assigned execution.

I don’t know how many pen drawings Jan De Cooman has made but it must be many hundreds. He actually has drawn his whole life: pencil sketches, charcoal drawings, pen and ink drawings, engravings, dry-points. One would almost claim that De Cooman drew all places of interest at Geraardsbergen.

It are pictures without pretention, but how handy drawn, how elaborate, how precisely executed.

Just attentively study, preferably with a magnifying glass, the fine sketches as they are printed in the “little walking guide of Geraardsbergen” (wandelboekje van Geraardsbergen) by Leo Van Nieuwenhove (printing house Victor Van Nieuwenhove, Markt Geraardsbergen, not dated but probably 1928), or on the promotion leaflet, published in 1938 by the V.V.V. “Geraardsbergen in the Flemish Ardennes”. You will be struck by the lifelike representation. You can follow the artists eye and feel the sure hand of the draftsman. You will hold in admiration the virtuosic play of lines aswell as the monklike patience of the draftsman.

In this period 1927-1928 two series etchings on Geraardsbergen emerged. I guess that these, at first sight simple, pen drawings were a pre-study, a workbook of these remarkable and valuable etchings.

It is in the art of etching that De Cooman came to full deployment and gave the best of himself. Since some years the etchings of De Cooman are highly valued by connoisseurs and wanted by dabblers.

The art of etching is a difficult art: it requires a great deal of mastery and an enormous amount of feeling, only achievable after years of trying and experimenting. What is more, every new etching poses new problems. One has to remove or add or retouch, over and over again to obtain a print that gives satisfaction. Only those who can draw very precise and minutely, for whom every line has its meaning, for whom no line is superfluous, may risk themselves in the art of etching.

De Cooman was first of all a scrupulous observer and a gifted draftsman. In the landscape etchings of Geraardsbergen, mainly in the wintersceneries it catches the eye how important the line is, especially when looking at the trees in the landscape.

De Cooman constructed his own press and printed his own etchings, in low volume (first series Geraardsbergen: 25, second series: 50)

He gradually mastered the different etching techniques: etching, dry point, engraving, soft ground, water tint and combinations of different techniques (e.g. for the marvelous etchings of the abbey of Averbode: etching, engraving and dry point). He has put them all masterly on paper. Despite of this, De Cooman will never be lined up with masters as: Dürer, Rembrandt or, closer to us, Jules De Bruycker and Felicien Rops, because De Cooman is too much vision and too less imagination, works too precise and rational and leaves too few room to the transposition. In other words, he does not sufficiently lift his subject from the banal reality into the spiritual atmosphere.

The six etchings of the abbey of Averbode rise above every other etching work. From the subject, the church interior, rises a sacred quietness. The judicious partitioning of clear and dark spaces and planes intensifies the evoked emotion and reminds of the best etchings of Gustave Dore.