Jan De Cooman was born in Zandbergen (Belgium) on august 4 1893, as the forth and youngest son of Leopold and Louise Heylemans.

The drawing talent of the boy must have been noticed. His first sketches were lifelike: trees, houses, meadows and fields of the beautiful landscape of the Dender river. A landscape that would fascinate him during his whole life. His uncle Jan Heylemans, painter and teacher at the academy of Sint-Gillis Brussels, could persuade his father to send Jan to the academy of Belle Art in Brussels. During five years, from 1908 till 1914, he went to school there. He was largely influenced by his teacher Constant Montald (1862-1940?), who was a meritorious painter of landscapes, interiors, still life and portraits – the genres that will be painted by Jan De Cooman later on.

Every year Jan De Cooman won the first prizes for drawing and nature-painting. He was also the laureate for portrait painting.

In 1910 he designed the flag for the catholic ‘werkmanskring’ of Overboelare (Belgium). He was only 17 years old. His artistic education was just finished as the Great War broke out. His first paintings were mainly portraits and interiors, but he would make drawings during the whole of his life, mainly landscapes.

In 1920 he married miss Clara Flamée, daughter of Richard, merchant at ‘de Kaai’ (the quay) in Geraardsbergen, and Anna Van Damme.

The newlyweds put up at a small villa with a large garden, on the west side of the Oudenberg.

From there he had a splendid view on the valley of the Dender, on the town along the banks, on the meadows, fields and bushes on the slopes of the Oudenberg, with villages, hills and trees. These sceneries are a revelation to an artists heart, and Jan De Cooman will never get enough of showing his delight on canvas, paper and copperplate.

But we are not that far yet. The young artist was unknown and had to find a way to make a living. He became a candidate and got the job of drawing-master at two grammar schools of the city, the Sint-Katerina grammar school and the Sint-Jozefsinstitute. He taught there from 1922 until 1930. Meanwhile he painted, but he mainly built his own press (the first electrically powered press) and he experimented and tried so to speak day and night to master the etching techniques.

His first etchings came out of his printing press in 1925. He continuously improved his working methods. In 1927 he printed ten etchings of Geraardsbergen, 25 copies of each. The result was marvellous and financially an unexpected succes.

During the same year he designed the flag of the catholic Flemish student guild. The name De Cooman is by now well known as an etcher. A second series of ten etchings picturing mainly landscapes of the Oudenberg was finished in 1929, at 50 copies of each etching.

Those beautiful etchings had of course attracted the attention of some connoisseurs and one prosperous industrialist (A. Maquestiau). The last one bought most of his etchings and many paintings.

He brought the painter into contact with friends-connoisseurs and made him a way to the art-loving quarters in the capital. Jan De Cooman, too humble, refused all offers. He stayed on his Oudenberg and continued his work without a break. His fame went crescendo and new orders came in. For doctor Arthur Vanderschueren he painted the illustrations of some of the fables of La Fontaine on the walls of his salon. And the consultation room of the doctor was adorned by lifelike illustrations of medicinal plants. (1926)

The year after, he painted the fourteen Stations of the Cross for the parish church of Zandbergen. In 1930 he resigned as drawing-master. Almost daily he went painting in the open air. Also during wintertime he went looking for subdued places around Geraardsbergen, working from within his car in which he installed a stove by himself.

Not infrequently he was accompanied by photographer and amateur-painter Th. L’Haire.

In 1931 the booklet “Kantwerksters en kantnijverheid te Geraardsbergen” (Lace-makers and lace-industry at Geraardsbergen) written by Augusta De Clercq was published by V. Van Nieuwenhove. Felix Timmermans once called this a jewel of a booklet. This praise pronounced by the visual-sensual Timmermans was probably caused for a great deal by the about twenty five reproductions (in small scale) of work of De Cooman: about ten pen-drawings, about ten etchings and about five paintings, all about the city Geraardsbergen and landscapes on and around the Oudenberg. 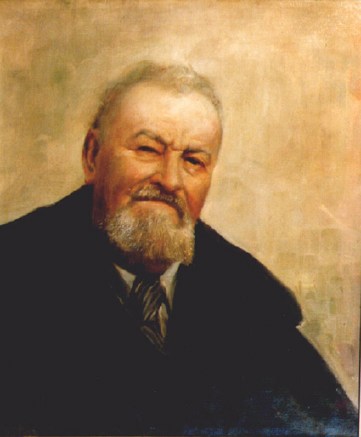 During one of his winter trips through the Flemish Ardennes, in the beginning of the years thirty, Jan De Cooman met the already well-known Valerius De Saedeleer (Aalst 1867) who lived at Leupegem. Jan De Cooman greatly admired De Saedeleers paintings of winter sceneries: the commodious, undulating, snow-covered Flemish Ardennes around Tiegem and Leupegem; with some dark detailed silhouettes of poplars and willows or sleeping fruit trees in the foreground and a couple of farmhouses snowed under. Upon request of the master, Jan De Cooman made six black and white etchings and three color etchings after these winter scenes. Six splendid etchings of the church and monastery of Averbode and a “Mater Dolorosa” were created in 1933.

Jan De Cooman still painted too: the Stations of the Cross in the parish churches O.L.H. Hemelvaart at Steenhuize (1935) and Sint-Martinus at Sint-Lievens-Esse (1936), and in the institute for mental patients at Eeklo (1939).

Several still lifes, portraits, interiors and landscapes (among others the successful “bloeiende perelaar” (flourishing pear-tree) from 1939) left his studio before 1940. His first flawless color-etching “Lente” (Spring), appeared in 1939. Worth mentioning are also the life-sized portrait of Dom Benediktus of Schepdaal (54K), abbot at Affligem, that was presented to him on the occasion of his silver jubilee of office (9 April 1937).

Jan De Cooman now received full recognition in the world of art. The material problems were off by now and he was the happy father of a large family. Fate attacked in 1937: his dear wife died after the birth of a ninth child, and also ninth son. This stroke came in hard and the artist recovered only slowly out of his lethargic condition of downhearted sadness. Little by little he started working again, but his energy was weakened. His health situation was not good at all.

In the winter of 1939-1940 he painted snow landscapes that seem to testify about the quiet resignation and the plaintive sadness of their creator.

In 1941 he remarried Rachel Geenens, of Oudenaarde.

Shortly after he left Geraardsbergen and put up at his native village, in the house where he was raised. He had a studio built to the house and started working with regained courage: landscapes (Parike, Onkerzele, Grimminge), trees, and most of all etchings that he loved so dearly: “The etching is for sculptural art what the organ is for music: the process of perfection. The etching achieves the pureness and swell that cannot be attained by any other process, neither by sheer painting, neither by sheer drawing” (De Cooman in an interview with G. De Knibber).

The badly balanced war-rations, the heavy family load, the work with acids, undermined his health, in so far that he worked almost exclusively in his studio.

He had to wait until 1947 for the first large international recognition. For his etching “In Mei” (In May) he received the first prize at the Tri-anual of Milan.

Shortly after he became very ill. He would not recover anymore and died in his home at Zandbergen on 11 June 1949.